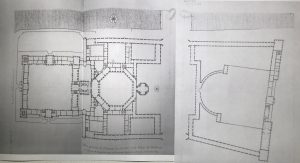 
This 2-part print documents Perrault’s first proposal for linking the remodelled Louvre and Tuileries palaces, built on different axes along the Seine. This scheme formed part of the ambitious remodelling of both palaces superintended during the 1660s by Louis XIV’s finance minister and building superintendent Jean-Baptiste Colbert: see introductory remarks to Levey gift, cat.39-82.

This print is clearly described in Suite et Arrangement (1727) as “en 2.planches.” However, the two sheets, of different dimensions, were apparently not recognized as related when they entered the Melbourne collection: they have widely varying accession numbers, and the stamps indicating Levey’s donation on p.183.179-1 are upside down. The reproduction above shows the two NGV prints in their intended relationship.

Perrault’s scheme (and a second, somewhat different one) were later described by Jacques-François Blondel (1705-74) as ingenious solutions to the problem of the misalignment of the two existing palaces by linking them through a series of courts. Blondel’s equivalent plan is reproduced below, after Latouche & Bédard 2016 (who observe that Bernini’s idea of a single large open courtyard between the two palaces still seemed the ideal solution to Blondel). 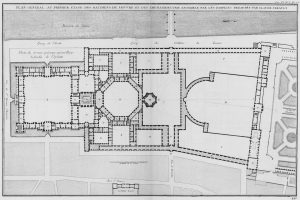 The two sheets appear separately in the NGV’s online catalogue, as noted above; and only the first is identified as by Bérain; author’s ID photos reproduced here (2019)