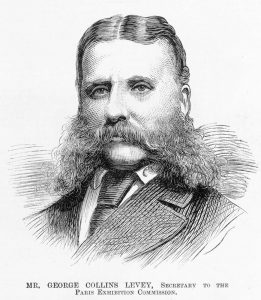 In 1879, George Collins Levey (1835-1919), a British-born journalist and newspaper editor who lived and worked in Australia, mostly in Melbourne, between 1851 and c.1883, donated a substantial collection of prints to the NGV – arguably the most significant donation to the gallery prior to the Felton Bequest. (For Levey, see in particular the biography by Suzanne Mellor, ADB 5, 1974; available online).

During the 1870s, Levey was closely involved in the organization of a number of international exhibitions in Australia (beginning with the Sydney exhibition of 1870), and travelled to other exhibitions elsewhere in the world, representing Victoria and Australia.

At the Exposition Universelle held in Paris in 1878 (at which he was awarded the French Légion d’honneur), Levey acquired a large group of nearly 200 prints (almost all engravings), and then donated them all to the Melbourne gallery in August 1879.

The NGV’s annual report for 1879 reported the donation laconically, describing them simply as “a collection of about 200 Engravings of Paintings, &c., obtained at the Paris Exhibition by George Collins Levey, Esq.” The NGV catalogues published in 1894 and 1905 are scarcely more helpful with details, each listing only a fraction of the engravings given by Levey (those that were on display then, apparently).

Nevertheless, most of the prints can be identified, and almost all of them are still in the NGV collection. Most of them are from the remarkable ensemble of engravings recording the artistic, architectural, cultural and military achievements of Louis XIV’s reign, collected in 1727 under the general heading of the Cabinet du Roi, totalling some 1,000 prints in 23 volumes: see now Suite et Arrangement (1727), summarising the contents.

Stamps on the backs of a number of the NGV prints indicate that they had previously belonged to the French National Library, presumably duplicate impressions deemed surplus to requirements (many thanks to Petra Kayser, Curator of Prints and Drawings at the NGV, for her informed advice on this matter, Sept. 2018, citing Lugt).

The prints donated by Levey fall naturally into several groups, as listed below.

These engravings, which formed Volume 1 of the Cabinet du roi, first issued in 1677 and then in its final form in 1727, reproduced the most highly prized paintings in the French Royal collection during the first part of Louis XIV’s reign. The prints, dating from 1671-82, were by noted French engravers of the day.

In the 1660s-70s, the paintings were displayed first in the Tuileries Palace, and then in a new suite of rooms in the Louvre known as the King’s Cabinet. Later, some were also transferred to Versailles; the majority are now in the Louvre. Refer individual entries for details regarding the source paintings, some of which have been reattributed. Italian Renaissance and Baroque artists predominated, although the largest number were by Poussin, the most recently deceased painter represented.

In the first edition of 1677, 22 paintings were reproduced, with others added later. Eventually, the group included reproductions of 38 paintings, all in the French royal collection except Raphael’s Transfiguration (cat.12-13).  Biblical and mythological themes predominated, with portraits, landscape and genre subjects generally excluded.

Levey’s gift included impressions of all the engravings in this group except Edelinck after Turchi The Deluge {1868} NGV [PR] (already donated to Melbourne in 1868: see cat.A1). Prints are listed below in the sequence indicated in Suite et Arrangement (1727), beginning with Old Testament subjects and ending with allegorical works.

8.    Picart after Bonifazio Veronese Holy Family 1682 {1879} NGV [PR] (after a painting in the Louvre formerly regarded as by Palma Vecchio)

9.    Picart after Domenichino Madonna and sleeping Christ Child {1879} NGV [PR] (after a Louvre painting formerly seen as by Annibale Carracci)

12-13.  Thomassin after Raphael Transfiguration of Christ 1680 {1879} NGV [PR] (the only 2-part print in this group, this was also the only engraving to reproduce a painting not in the French Royal collection at the time)

20.  Chasteau after Carracci (Annibale) Assumption of the Virgin {1879} NGV [PR] (the source in this case was a reduced-scale copy in the French royal collection of Carracci’s altarpiece in S.Maria del Popolo, Rome)

30-33.  Rousselet after Reni Labours of Hercules {1879} NGV [PR] (the four scenes are: Hercules killing the Hydra; Hercules and Achelous; The Abduction of Deianira by Nessus; and Hercules mounting his funeral pyre)

34.  Audran after Spada Aeneas saving his Father {1879} NGV [PR] (the source painting [Louvre Inv.680] was previously thought to be by Domenichino)

36.  Picart after Correggio Virtue triumphant over Vice 1672 {1879} NGV [PR] (Correggio’s allegories of Virtue and Vice, painted for Isabella d’Este in about 1530, were later bought by Charles I of England and then Louis XIV)

38.  Picart after Spada The Concert {1879} NGV [PR] (the inscription describes the Louvre painting as by Domenichino, the older attribution)

Plans, elevations and views of the Louvre and Tuileries (cat.39-82)

Levey’s gift included all the engravings collected in Vol.4 of the Cabinet du roi, dating originally from the 1660s and 1670s, documenting the modernization and expansion of the Louvre and Tuileries palaces during that period. These comprise plans and elevations of both palaces (cat.39-53); and three sets of engravings of decorative projects carried out in the two buildings, also in the 1660s-70s (cat.53-82). These projects dominated the first part of Louis XIV’s reign, prior to the eventual transfer of the entire court to Versailles in 1682: for a good survey, see Berger A Royal Passion (1994), ch.4.

Prints are catalogued below in the sequence in which they are listed in Suite et Arrangement (1727), pp.3-4.

These engravings correspond essentially to vol.5 of the Cabinet du roi (1727), comprising plans, views and elevations, mostly by Israel Silvestre, originally produced between 1664 and 1682 (cat.83-102); and reproductions by Baudet and others of major decorative projects from the 1670s-80s (cat.103-113). For the aggrandisement of Versailles and the construction of its gardens by Le Vau and others during the opening years of Louis XIV’s reign (from 1661), see Berger A Royal Passion (1994), ch.6.

These sets of engravings, published as vol.11 of the Cabinet du roi (1727), document festivities staged at Versailles in 1664, 1668 and 1674, during the decades preceding the full transfer of the French court to the completed palace and gardens. Louis Marchesano observes that these spectacles, which included performances of plays, ballet and operas as well as fireworks and other special effects, were “affairs whose splendor, magnificence and (for some observers) profligacy set the tone for the first part of Louis XIV’s reign”: see Fuhring A Kingdom of Images (2015), p.262.

Le Clerc coordinated the series, which also included engravings by others – for details, see the following entries:

These comprise a handful of other engravings relating to Louis XIV’s reign (cat.174-177); and some prints dating from Levey’s own era (cat.178-96).

175.  Jeaurat after Le Brun Interview of Louis XIV & Phillip IV 1728 {1879} NGV [PR] (reproducing one of Le Brun‘s tapestries, showing the prelude to the marriage of Louis XIV and Maria Theresa of Spain in 1660; see also next entry)