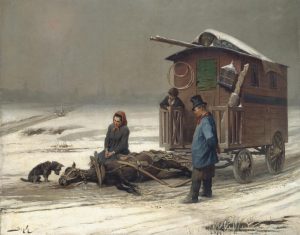 This painting was bought after being shown at the International Exhibition in Melbourne in 1880-81, and shortly afterwards the critic of the Melbourne Argus gave it glowing praise: “There is probably no picture in the whole collection that tells its simple story more naturally, dramatically, and pathetically than this one.”

A few years later, though, it received adverse criticism from Bernard Hall (appointed NGV Director in 1892), who remarked laconically in the 1894 NGV catalogue that Beyle began life as “a house painter.” And in a confidential report to the Trustees in 1900, Hall was more forthright: “It is catering to popularity, & making a kind of scrap-book of the gallery, that such pictures as La derniere Etape de Coco come to be bought… not the stuff worthy of a collection made by the State…”

However, attitudes to Victorian-era pictures have softened considerably in recent decades, and this picture now hangs in the 19th-century gallery at NGV International, where its empathetic focus on animals parallels other works of the period, notably Schenck Anguish {1879} NGV [PA], and also strikes a contemporary chord.

Beyle was actually quite successful in his day, painting a number of Orientalist works based on his travels to Algeria, and showing at the Paris Salon from 1867 onwards. In 2014, his 1879 painting The Wedding Procession fetched US $25,000 at a Christie’s auction in New York.