NGV 1894 indicates that both this bust and Boehm [after] John Ruskin {1876?} Geelong [SC] were “cast and presented in 1876 by the Spence’s Metal Company of London.” Given that the Ruskin bust is in plaster, it seems likely that this one was too. However, the later fate of this work is unknown. 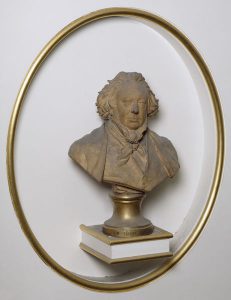 The sitter (1808-82) was the prime mover behind both the Great Exhibition of 1851 and the establishment of the South Kensington Museum (now the V&A), of which he was the first director. Boehm’s terracotta bust of Cole, dating from 1875, is in the V&A: see reproduction at right.

The acquisition date of 1876, indicated in both NGV 1894 and 1905 for both plaster busts, must remain moot. While it does correlate with the date of Boehm’s original bust of Cole, it appears to be too early for Ruskin’s (see linked entry for details).

See 1943 auction of NGV sculpture. For Cole, see http://en.wikipedia.org/wiki/Henry_Cole; and for the V&A bust of him, see http://collections.vam.ac.uk/item/O72764/sir-henry-cole-kcb-1808-bust-boehm-joseph-edgar/, mentioning variants in marble, metal and plaster. The plaster cast in the National Portrait Gallery (NPG 865) is also dated 1875: see https://www.npg.org.uk/collections/search/portrait/mw01389/Sir-Henry-Cole?LinkID=mp00959&search=sas&sText=Henry+Cole&OConly=true&role=sit&rNo=1