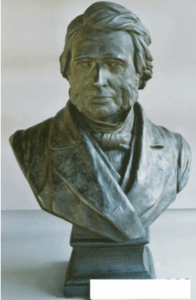 The supposed acquisition date of 1876, however, must be questioned, at least as regards this bust (although the dates fit in the case of Cole). Boehm’s original bust of Ruskin (in the Ashmolean Museum since 2001), on which the present cast was obviously based, was only commissioned for the Oxford School of Drawing in 1879, first sketched in clay, and then completed in marble by 1881. Several plaster casts are documented, including one in the National Portrait Gallery in London, also dated to 1881. This also seems the earliest probable date for the manufacture and presentation of the cast formerly in Melbourne.

A caricature by “Spy,” the pseudonym of Leslie Ward, showing Boehm confronting his bust of Ruskin, appeared in Vanity Fair in January 1881 (the drawing is now in the collection of the Museum of London).

For this bust, see Geelong Gallery website (details as shown above, describing it as made of “plaster composite”); many thanks to Geoffrey Edwards for his help in clarifying the history of this work (email correspondence, with ID photo as shown, March 2020). See also Carmody, “The Naked Saint” (2011), esp.n.31

For Boehm’s marble bust in the Ashmolean, see e.g. http://ruskin.ashmolean.org/collection/8979/object/14965 (accessed 5 May 2020); see also James Dearden, John Ruskin: a Life in Pictures, Sheffield: Sheffield Academic Press, 1999, pp.119ff. (cat.no.149 and colour plate 22), also mentioning other related sculptures by Boehm, and the casts made from the marble bust. For the plaster bust in London, see https://www.npg.org.uk/collections/search/portrait/mw05509 (reproduced)