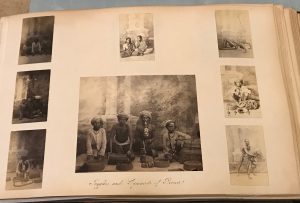 The SLV album listed here is almost certainly identical with the “book containing 228 views of Cashmere and India” (photographer/s not named) noted under purchases in the NGV’s annual report for 1872. Confusingly, this collection is also listed under purchases in AR 1871, where it is described as by “Bourne & Shepherd, at Simla” (and titled “Views of India”).

The photos vary from large format landscapes and views of monuments, to groups of smaller prints. Subjects treated include the Taj Mahal, Simla, Lucknow (including the old Residency), the gardens of Islamabad and other locations in Kashmir, as well as various portraits of individuals and groups, as shown here.

Refer SLV catalogue (described as transferred to the Pictures Collection in 1986), including a full list of individual photographs. However, none is available yet in reproduction; author’s ID photo reproduced here