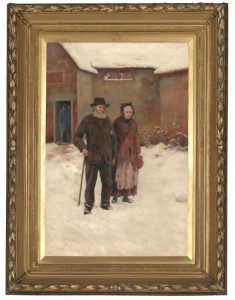 The artist came from a wealthy Anglo-Australian family, the a’Becketts, and showed early talent in both watercolour and oil painting. Encouraged by members of her family, including her uncle Edward A’Beckett, she pursued an artistic career, and in 1886 married Arthur Boyd, senior, who had been a fellow student at the National Gallery school: see now * Boyd (A.) Waiting for the Tide 1895 {1895} Loc? [PA].

Anita Callaway argues that Emma Minnie Boyd’s reputation as an artist has been obscured to some extent by her subsequent role as the Boyd family “matriarch.” The NGV collection also includes several sophisticated domestic images produced when she was still in her teens, probably more characteristic of her oeuvre than this rather mawkish later picture, painted when she and her husband were living in England (1890-93).

The gilt frame of this work, made in Melbourne in the 1890s, jars somewhat with the iconography of destitution.

For the other NGV works by Emma Minnie Boyd, see http://www.ngv.vic.gov.au/explore/collection/artist/546/ and Bunbury This Wondrous Land (2011), p.167: an informative entry by Elena Taylor, on the 1875 watercolour Interior with figures, The Grange, presented to the NGV by Dr Joseph Brown in 2004 (with further references)