This was one of several contemporary Australian paintings purchased for the Melbourne collection from the Victorian Artists’ Society in 1894-5: see e.g. Humphrey Under a Summer Sun 1895 {1895} NGV [PA]. The present work was still listed in the NGV in 1943 (cat.no.58), but no longer appears to be in the collection. His St Kilda Pier (1888), purchased for the NGV in 1967, is reproduced below.

The artist, who arrived in Melbourne with his parents in the mid 1870s, painted numerous oils and watercolours of coastal scenes and other landscape subjects. Although he knew Phillips Fox and McCubbin, he was not a participant in the major developments of Australian landscape painting of the period. But he is generally regarded as the father of the Boyd “dynasty.” 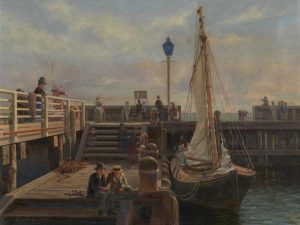