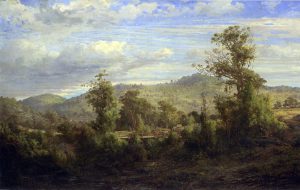 The contrast between this atmospheric work and Buvelot Summer Afternoon, Templestowe 1866 {1869} NGV [PA], painted less than 15 years earlier, reveals a striking development. This painting exemplifies Buvelot’s late approach to the Australian landscape, moving in the direction of a “casual” if still artfully composed view, more closely comparable with the ambitions and techniques of 19th-century French plein air painting, and the ideas of the emerging “Australian Impressionists.”

Buvelot’s own detailed remarks on the present painting spelt out his ambition to produce an archetypally Australian image, by contrast with the idealizing vistas of his contemporaries. He was rewarded with a gold medal at the 1880 Melbourne Exhibition, and purchase of the work for £300 by Stanford, a locally-based American importer of Singer sewing machines, who later donated the picture to the NGV.