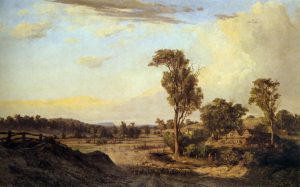 This canvas and its twin, Buvelot Winter Morning, near Heidelberg 1866 {1869} NGV [PA], were among the first works the artist painted after his arrival in Australia in 1865. Later, he said that the Melbourne gallery’s early purchase of these pictures and Buvelot Waterpool near Coleraine 1869 {1870} NGV [PA] was crucial to launching his career in Australia.

The present painting, listed in both 1894 and 1905 as “Summer Evening near Templestowe,” was originally shown at the Melbourne Intercolonial Exhibition in 1866 as “Summer Afternoon, Templestowe.” The latter title, used here, was apparently preferred by the artist himself (see Galbally 1992, citing Daniel Thomas).

Frederick McCubbin, acknowledging the debt the Heidelberg School painters owed to Buvelot’s example, later praised this work as “thoroughly Australian.” In fact, it still obviously reflects the European landscape traditions in which Buvelot was trained, although not as obviously as several other colonial landscapes hanging near it in the McArthur Gallery during the pre-Felton era, notably Chevalier The Buffalo Ranges 1864 {1864} NGV [PA] and Guérard [von] Valley of the Mitta Mitta 1866 {1866} NGV [PA].