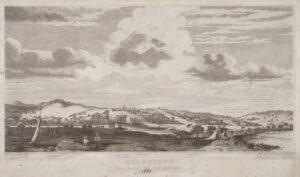 The impression shown here seems likely to be the  engraving of “Melbourne in 1839” listed in both NGV 1865 and AR 1870-71, as cited below. This is the earliest known print of Melbourne.

Adamson arrived in Australia in about 1825, and died en route to Calcutta in 1841. In 1840, the Port Phillip Gazette praised his images of the first settlement at Melbourne, describing the engraving shown here as “a very correct representation of ancient Melbourne; as it appeared twelve months since.”

Another impression of this engraving was purchased by the NGV in 2011. See also Carmichael after Adamson Melbourne from the South side of the Yarra {1891} SLV [PR], a lithographic copy made in 1881.

For Carmichael, see linked artist entry. For Adamson (not listed in either AKL or Bénézit), see Kerr Dictionary (1992), p.7, and the updated biography in Design & Art Australia online: https://www.daao.org.au/bio/john-adamson/biography/ (1992/2011; accessed 3 Jan.2016), including the passage quoted (from the Port Phillip Gazette of 5 Sept.1840); see also Christine Bell &  Philippa Wallis, commenting on the 1839 engraving in Bunbury This Wondrous Land (2011), p.122 (with a good reproduction of the NGV impression)