The early engravings and photographs of Melbourne’s plaster casts, listed below, provide valuable information on the changing location and arrangement of the collection, as well as helping with identification of individual casts. Nos.1-3 document their initial exhibition in the first MPL building in the 1860s. Nos.4-8 and 10 show the casts in the Sculpture Gallery located in the new north wing constructed in 1866 (mirrored by the temporary Picture Gallery to the south); and no.9 shows a further group of casts displayed in the main library building in the 1880s. Nos.1-3, 5-6, 9 and 10 can be dated precisely. For higher resolution photos, use links indicated. 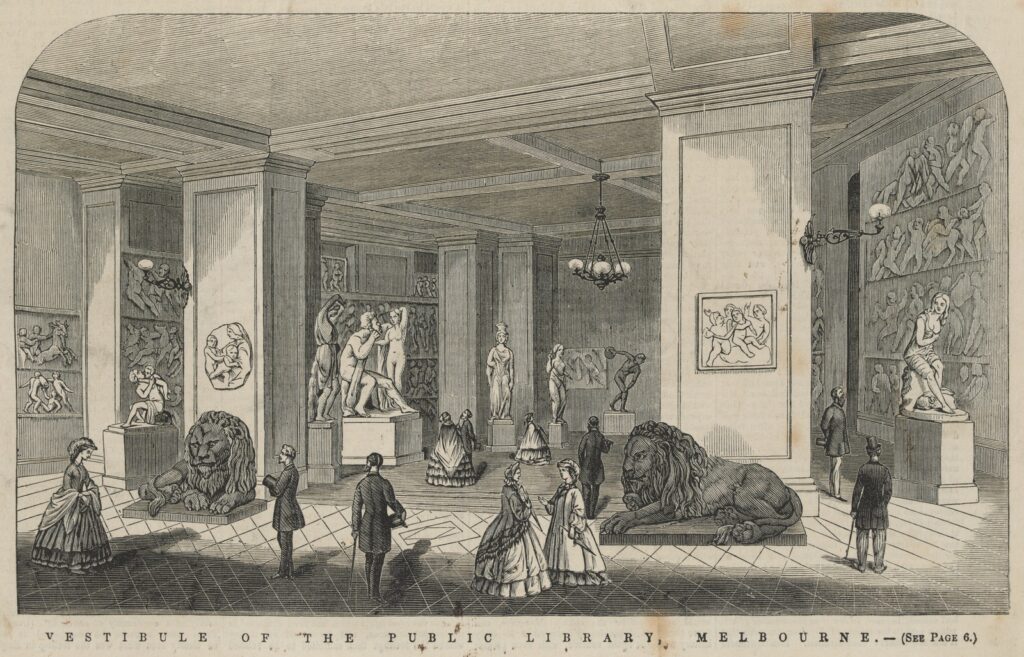 This view shows part of what seems to have been the earliest arrangement of the plaster casts acquired c.1860-62, together with (in the foreground) the two zinc lions later installed outside the Library entrance: see * Unknown (Italian 19C?) Two lions {1862} [SC]. The amateurish style of the anonymous engraving makes identification of some of the plaster casts difficult, but recognizable examples include: to the left, Maternal Affection (I.78) and Michelangelo’s Taddei Tondo (I.67); centre left, Amazon (I.6) and Hercules & Hebe (I.62); centre background, Canephora (I.26 or I.27), (?) Venus Genetrix (I.106) and Discobolus (I.46), and, at the far right, Dorothea (I.47). The architecture, as in overviews 2 & 3 below, indicates that the exhibition area was the ground floor area of the main MPL building, the Library’s first “Sculpture Gallery.” 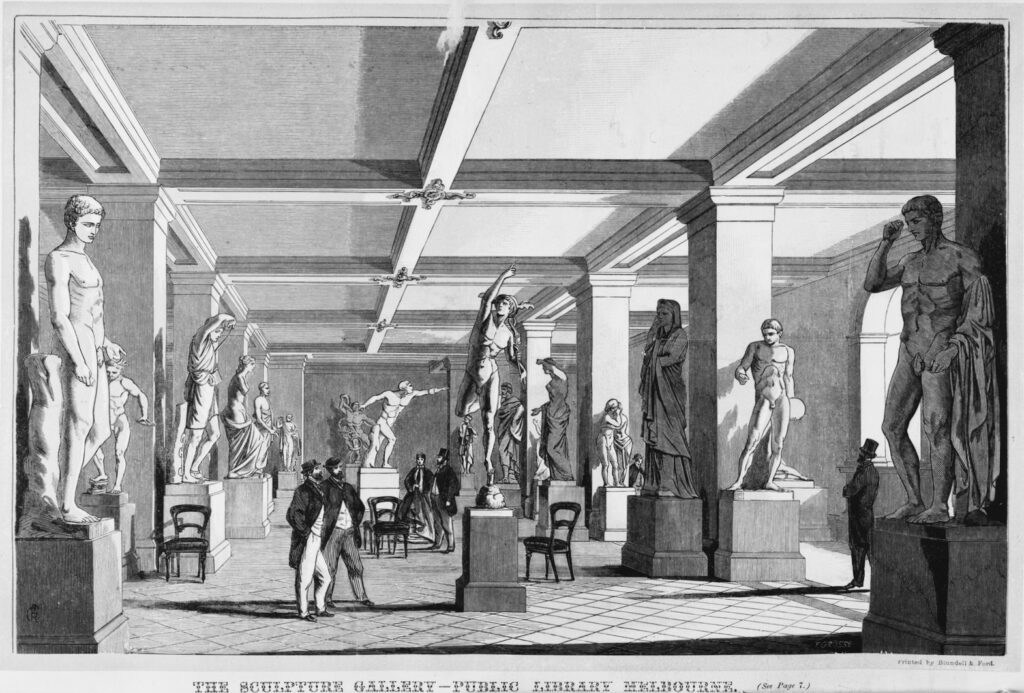 One of two similar views dating from 1866 (see also no.3 below), this engraving appears to show the revised arrangement of the casts in the MPL’s first main building (below Queen’s Hall). The precise detail enables identification of a number of the casts. Antinous (I.9) and Germanicus (I.55) are prominent in the left and right foreground; Giambologna’s Mercury (I.80) is centrally placed, with Pudicitia (I.95) and Discobolus (standing) (I.45) to his right; clearly visible at the back is Laocoon (I.75), behind the so-called Fighting Gladiator (I.58). Oswald Rose Campbell (1820-87), who made the drawing for this print, later taught drawing at the National Gallery School (1876-86). 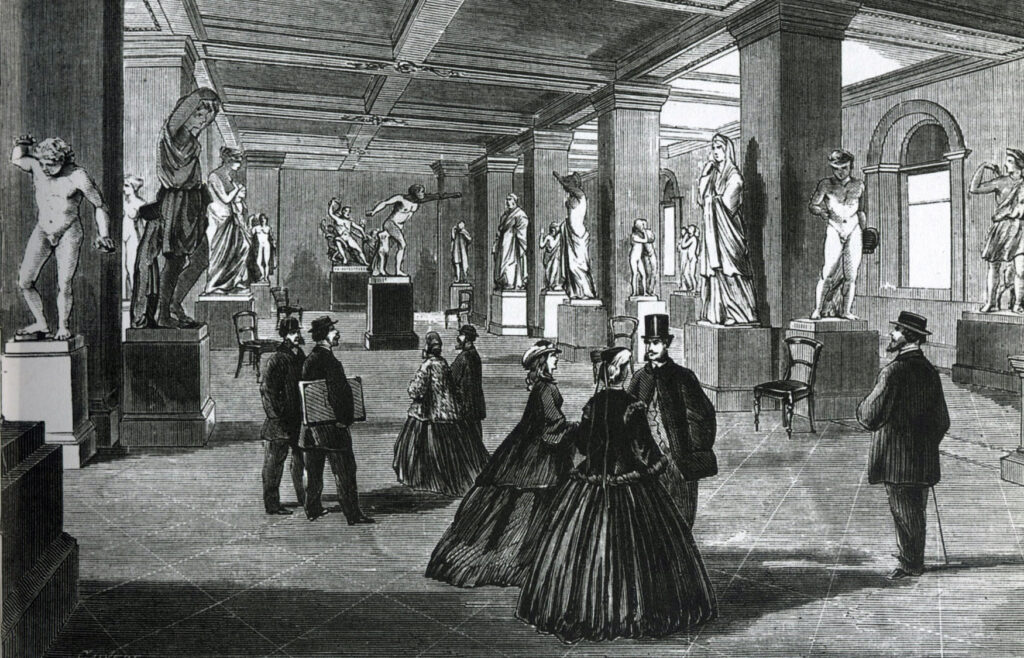 This view, published on the same day as no.2 above, shows the same arrangement of casts (viewed from a slightly different position), but in less precise detail, the engraver evidently finding more interest in the foreground assembly of Melburnians. Diana à la Biche (I.43) is visible at the extreme right. For the engraver, see *Calvert (?) after Cope Departure of the Pilgrim Fathers {1874} Loc? [PR]. The SLV catalogue indicates that this engraving was based on a photograph by Charles Nettleton. 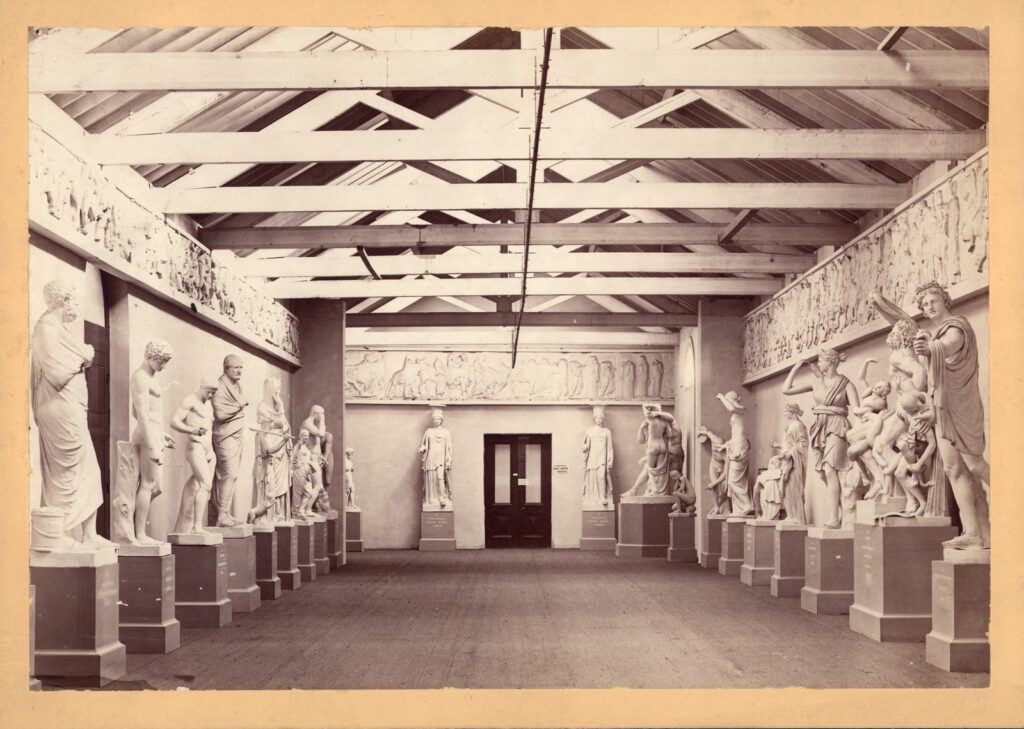 This is possibly the earliest view of the casts in their new home in the north wing linking the original MPL building to the iron-frame “Great Hall,” built for the Intercolonial Exhibition held from October 1866 to February 1867. The exact date of this photo is uncertain, though the SLV date it to c.1875-80, and the title National Gallery of Victoria implies a date of 1870 or later. However, all the casts shown here were already listed in the 1865 catalogue. This view shows them displayed systematically, their plinths clearly marked with the name and catalogue no.of each figure, with the Bassae and Parthenon friezes above (see I.20 and I.90). Recognizable casts include the two Canephora figures (I.26-27) on the back wall; Sophocles (I.98) in the left foreground; and a sequence of identifiable statues on the right wall beginning with Apollo Belvedere (I.11), nearest the camera. 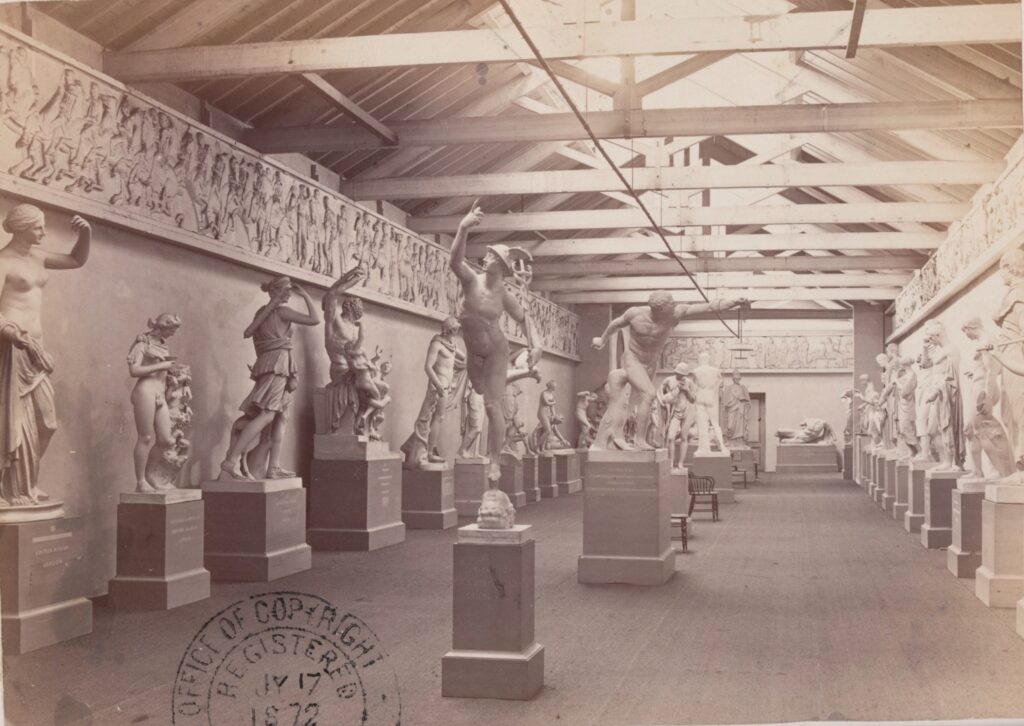 The first of a pair (see also no.6), looking both east and west, evidently photographed at the same time to show the full contents of the cast gallery in the north wing. The arrangement of casts is different from that in overview no.4, and there are now casts on plinths in the centre of the room, perhaps implying a later date (accommodating additions). Further identifiable figures include, in the left foreground, the Townley Venus (I.109) and Bacchus & Ampelus (I.18); and, towards the back, Minerva (I.84) and Ilissus (I.72). 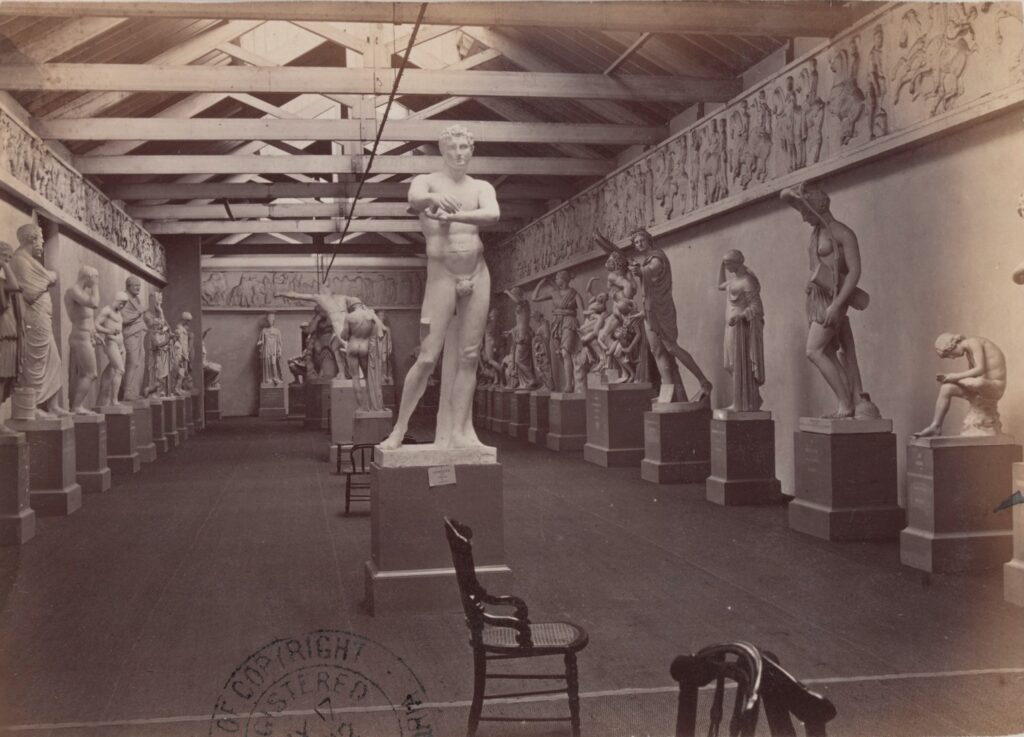 The second in this pair (see no.5), this photo gives pride of place to the recently-acquired cast of the Apoxyemenos, also known as Athlete (I.16), in the centre foreground; further back in the central group, seen from the back, are Cyparissus (I.32) and the Fighting Gladiator (I.58). Boy extracting Thorn (I.24) is in the right foreground. This view may be compared with overview no.4, with the camera pointing in the same direction (east?). 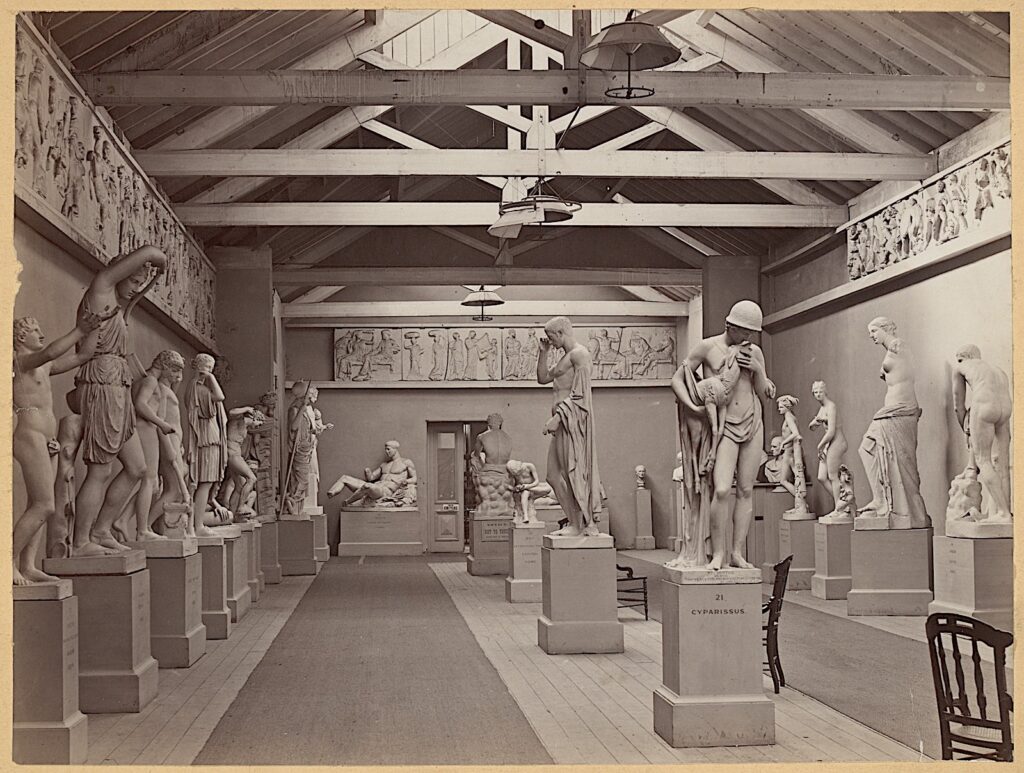 This view, looking in the same direction as no.5 above, reveals a further rearrangement of the casts, with Cyparissus (I.32) in the centre foreground, and Theseus (I.101) on the back wall. Also identifiable in the left foreground is Youth invoking the gods (I.117), followed by Amazon (I.6) and Castor & Pollux (1.28), and, further back on the left wall, Polyhymnia (I.93). Several busts are visible at the back here, on the right, possibly Julius Caesar (II.66), Clytie (II.28) and the Duke of Wellington (II.132). The SLV dates this anonymous photo to c.1900-1910, but that seems late, since some of these casts were already being de-accessioned or lent out by that time: see introductory remarks. 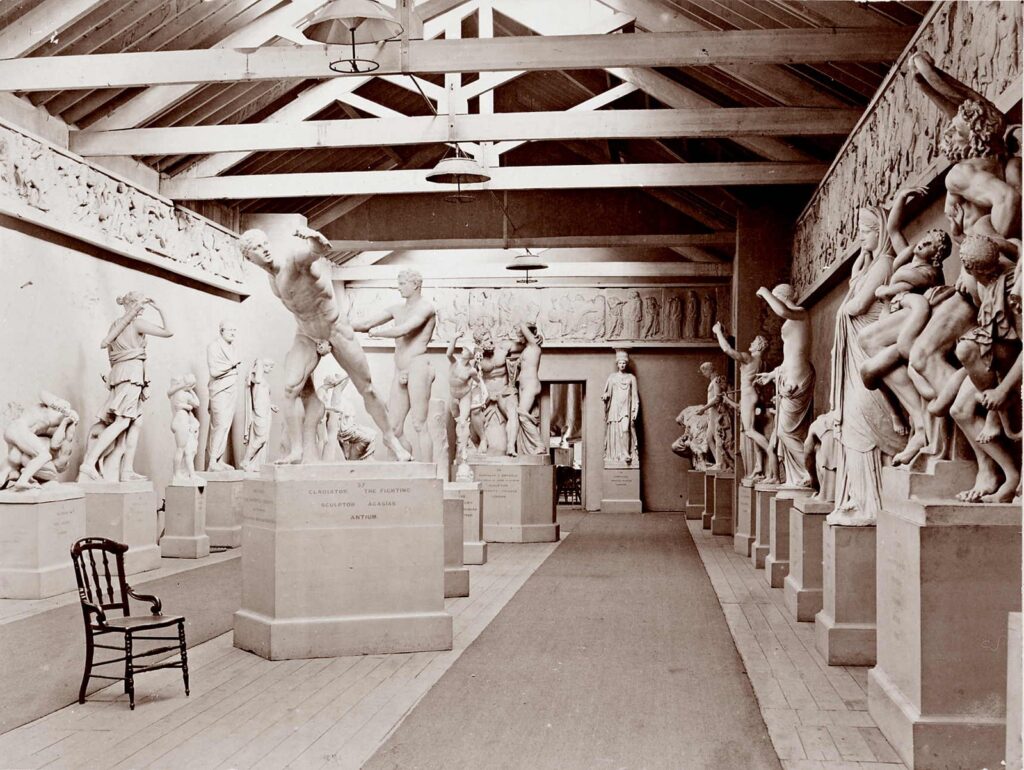 The carpeting and light-fittings in this photo look similar to no.7 above, and it is shot in the opposite direction, suggesting that the two photos might be another pair, even though the diagonal placement of the central plinths here looks different. The SLV dates this photo to c.1905, but that seems too late, especially since overview no.10 is clearly dateable to 1905. Casts not easily identifiable in other overviews include the so-called Boxers (I.22), at the extreme left; Hercules and Hebe (I.62, identified on the plinth as “Hercules and Omphale”), towards the back of the centre row; and the two sections of The Fates (I.51), partially visible at the back, left and right. 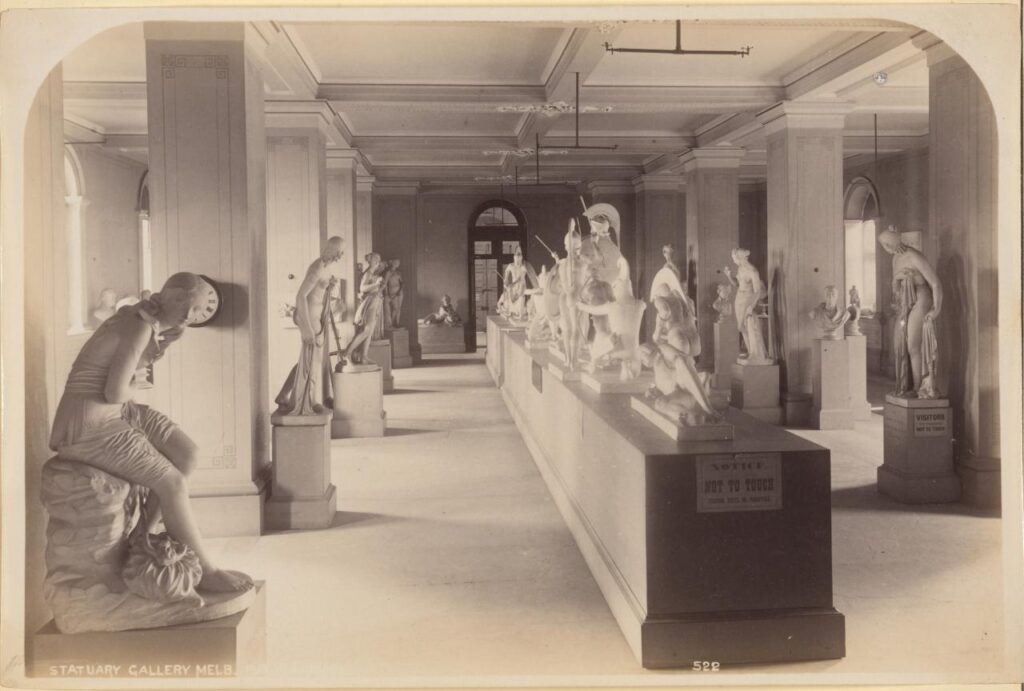 This view is particularly interesting on several grounds: clearly documented to the 1880s, it shows a number of Melbourne’s casts (including several not visible elsewhere) in another space besides the truss-roofed north wing gallery (cf.overviews no.4-8 and 10). Here, they appear to be exhibited in the original library building (cf.overviews nos.1-3), with the casts of the Aegina Warriors (I.3), donated in 1881, on the long central plinth. Casts to the left include (from foreground): Bell’s Dorothea (I.47); a female figure yet to be identified – possibly the as yet untraced Ariadne (I.13); Benzoni’s Diana (I.42); a partially visible female figure possibly identifiable as Dantan’s Tambourine Girl (I.99); Hiram Powers’ Greek Slave (I.60); and Bienaimé’s Bacchante (I.17), clearly visible against the back wall. In the right foreground is a figure identified on the plinth as Foley’s Innocence (I.43), and, further back, Thorvaldsen’s Venus (I.112), together with a number of busts, possibly including the bust of Handel (II.56); near the window in the right background is the statuette of Joseph Priestley (I.94).

Photograph of the cast gallery published in the 1905 NGV catalogue (p.154) [SLV] 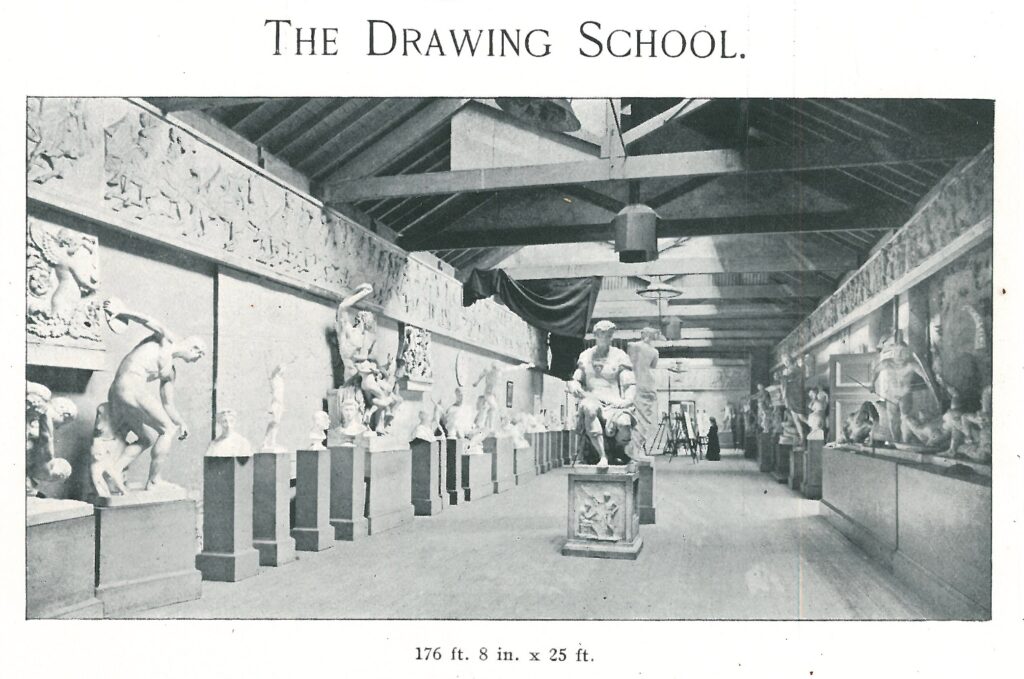 This photo, the sole reference to the plaster casts in the 1905 NGV catalogue, is headed “The Drawing School,” clearly indicating that by this time the casts had come to be seen primarily as assets of the National Gallery School. Emphasizing the point, easels and a student are visible in the background. Various casts noted in earlier overviews can be made out here, including, to the left, Discobolus (I.46) and Laocoon (I.75); Giuliano de’Medici (I.56) in the centre, and the Aegina Warriors (I.3) in the right foreground.