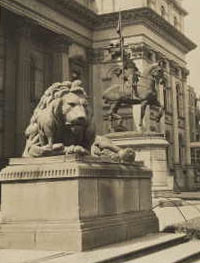 These statues were bought on the advice of Redmond Barry in London. An 1863 engraving of the library’s entrance hall shows them prominently displayed among the plaster casts and other sculptures acquired in the first years of the collection.

They were subsequently installed in front of the public library (detail of 1918 photo shown here). However, by 1924, they were said to have become so dilapidated that they were removed and transferred to the Melbourne Zoo, and apparently later discarded.

The statues were already targeted for replacement by 1907, when Bernard Hall entered into correspondence with famed French sculptor Auguste Rodin (1840-1917), about the possibility of his producing one or two large bronze lions for the library steps: for the photo, see 1907 Public Library forecourt.

Hall had already selected two Rodin sculptures in the first batch of Felton Bequest acquisitions in 1905 (when he and Rupert Bunny met the sculptor at his Paris studio). In a letter to Rodin of March 1907, Hall described the existing statues at the top of the library steps as “decrepit” and “falling to pieces,” and sent a photo of the intended site. This project fell through; but in 1909 the NGV purchased a small bronze of Rodin’s “crying lion” (Le lion qui pleure, 1881; cast c.1905).

For the correspondence between Hall and Rodin, see Jaynie Anderson & Paul Paffen, “The sculptor writes: Rodin in correspondence with Melbourne,” in Rodin: Sculpture and Drawings, National Gallery of Australia, 2001, pp.125-37, esp.131ff., also including a reproduction of the photograph of the Public Library steps that Hall sent to Rodin in 1907 (p.131)