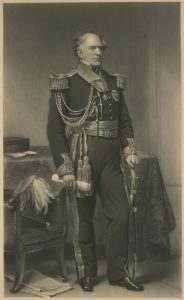 The other was presumably the present print, although the State Library catalogue lists it as accessioned only in 1934, and describes it as based on a painting by a certain W.M. Tweedle (perhaps a copyist?). But the image seems closely related to Buckner’s portrait at Government House, Sydney, noted by the State Library as the source of Melbourne’s oval portrait of Denison (SLV H1527).

For Buckner, see linked artist entry. Nothing appears to be known about Tweedle