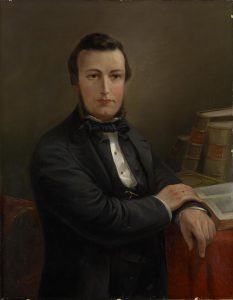 This posthumous portrait shows Dr John Maund (1823-58), a local physician who, during his brief period in Melbourne (he immigrated in 1853, and died 5 years later, aged only 35), was one of the founders of the Melbourne Lying-in Hospital (later the Royal Women’s Hospital), a founding editor of the Australian Medical Journal, and also a respected analytic chemist!

This was an early NGV acquisition, donated by the sitter’s sister the year before the purchase of Chevalier The Buffalo Ranges, Victoria 1864 {1864} NGV [PA].