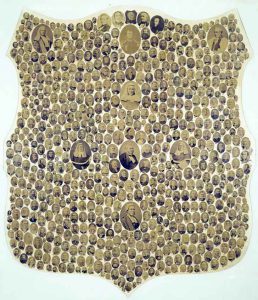 The SLV lists all the individuals represented in this extraordinary collection of photos, taken on Chuck’s initiative by him and others. According to the 1884 and 1905 NGV catalogues, no fewer than 713 pioneers, most of them resident in Victoria by 1843, appear in the assemblage.

Paul Fox describes it pithily as “a pictorial genealogy of the occupation of the colony” (as quoted in Bonyhady & Sayers 2000).

For Chuck, see linked artist entry, noting that he was also responsible for a number of the “painted photographic portraits” of colonial governors, commissioned for the Public Library from 1866 onwards: see now “Oval Portrait” series.

Coppin (1819-1906) was an energetic impresario who arrived in Australia from Dublin in 1843, and was involved in a wide array of theatrical and other ventures, especially in Melbourne, over a long and colourful career. During the 1850s, for a time in partnership with Gustavus Brooke (see Summers (Charles) Gustavus Vaughan Brooke {1868} SLV [SC]), he ran the Cremorne “pleasure gardens” in Richmond, the site for popular entertainments, theatre, fireworks etc., complete with painted panoramas and plaster casts of antique statuary. In his later years, he was also a member of the Victorian parliament.

Tim Bonyhady (in Bonyhady & Sayers 2000) notes that Chuck’s original intention to present this work to the Public Library did not eventuate. It was purchased by the Old Colonists’ Association of Victoria (founded in 1869) for their founding President, Coppin, who in turn presented it to the library in 1880.

The SLV catalogue describes this copy as “transferred from the Victorian Patents Office to the Melbourne Public Library 1908,” which may imply that it was a different copy from the one donated by Coppin in 1880. See also Bonyhady & Sayers Heads of the People (2000), pp.7ff. (Bonyhady’s introduction, as noted above; also citing Paul Fox, “Images of Transmission: Genealogy and Ancestry,” Photofile 19, Spring 1989; as quoted above)