The sitter (1808-73) presided over the French Second Empire from 1852-70. Winterhalter’s oil portrait and a matching portrait of the Empress Eugénie, both of c.1853, are presumed to have been destroyed in the fire at the Tuileries in 1870. An oil copy of the portrait of Napoleon III is preserved in the Museo Napoleonico, Rome: see photo below.

A year after he received the commission for this print from the Emperor, Samuel Cousins was admitted as a full member of the British Royal Academy in 1855 (the first 19th-century engraver to be honoured thus). The print also earnt him the French Légion d’honneur and a gold medal as “Graveur étranger” (see Hunnisett 1998).

The present engraving, recorded in NGV 1894 as presented by the sitter, no longer appears to be in the Melbourne collection. However, other prints after Winterhalter are held in the NGV, including portraits of Queen Victoria and Prince Albert (purchased in 1930). And one of the NGV’s oil sketches by Folingsby, acquired after his death in 1891 – see Folingsby (G.) Oil studies {1891} NGV [PA] – is a copy of another Winterhalter portrait. 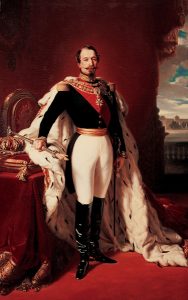 For Winterhalter’s original portraits of Napoleon III and Eugénie, see https://franzxaverwinterhalter.wordpress.com/franz-xaver-winterhalter-works-1851-1855/ (The Winterhalter Catalogue, cat.nos.475 and 476); and for the copy of the portrait of Napoleon III in the Museo Napoleonico in Rome, shown here, see http://www.museonapoleonico.it/en/percorsi/percorsi_per_sale/sala_iii_il_secondo_impero/l_imperatore_napoleone_iii. For Cousins, see AKL 22 (1999), p.12; Bénézit 4, p.90; and Basil Hunnisett, Engraved on Steel, Routledge, 2018 (1st publ.1998), refer Index (available via Google Books)

There is an extensive bibliography on Napoleon III and the Second Empire; see e.g. John Bierman, Napoleon III and his Carnival Empire, London, 1989; Alan Strauss-Schom, The Shadow Emperor: a Biography of Napoleon III, New York, 2018; and https://www.musee-orsay.fr/en/events/exhibitions/in-the-museums/exhibitions-in-the-musee-dorsay-more/article/spectaculaire-second-empire-44074.html?S=&tx_ttnews%5BbackPid%5D=649&cHash=ff30c60475&print=1&no_cache=1&