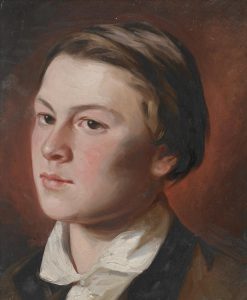 The NGV’s annual report for 1891 notes the acquisition of 83 oil studies from Folingsby’s estate, 56 of which are extant in the NGV (for details, and reproductions of most of them, see the gallery’s online catalogue). Others, lent to various schools and regional galleries in the earlier 20th century, may still be located elsewhere.

These works were acquired together with a set of landscape studies by Folingsby’s wife Clara: see Folingsby (C.) Oil studies {1891} NGV/Loc? [PA]. One of the studies originally acquired as by G.F.Folingsby has now also been reassigned to his wife: see Untitled (Landscape: white flowering trees and pine trees) (NGV p.395.81-1).

None of these studies was listed in the NGV catalogues published in 1894 and 1905, possibly suggesting that they were regarded primarily as art school resources.

For the work reassigned to Clara Folingsby, see https://www.ngv.vic.gov.au/explore/collection/work/34533/. For the subsequent loan of some examples by both G.F.Folingsby and his wife, see e.g. 1929 SLV/NGV Annual Report, pp.15-18. For an interesting discussion of Folingsby’s sketches in relation to his teaching, see Astbury City Bushmen (1985), pp.26ff.