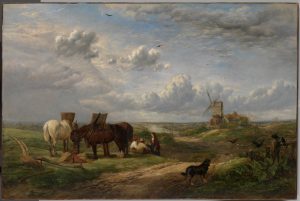 As noted in NGV 1894 and 1905, this painting was shown at the Royal Academy in 1850. Creswick was responsible for the landscape, and Ansdell painted the animals and people. This was the one of the first of several collaborative pictures made by the two men.

Like Bough Weald of Kent 1857 {1871} NGV [PA], this image of England as a rural paradise must have seemed increasingly distant to those accustoming themselves to the realities of the Australian landscape and climate in later 19th century Melbourne.

Bernard Hall, appointed NGV Director in 1892, was himself only relatively recently off the boat when he arranged for this painting to be hung next to Buvelot Waterpool near Coleraine 1869 {1870} NGV [PA], reinforcing the comparison by arranging for the two works to be reproduced on facing pages in the 1894 NGV catalogue.