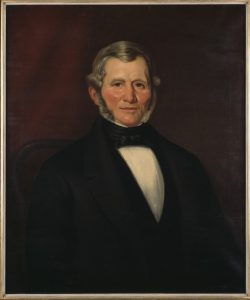 In 1851, the bulk of his squatting run (along with others) was made available by the government for purchase, and was bought by the wealthy landowner W.J.T. (“Big”) Clarke (1805-74). Evans subsequently leased the homestead and remaining land, and moved to Melbourne to run a city hotel.

This portrait is presumed to date from Dowling’s second visit to Victoria from Tasmania in 1856, prior to his departure for England in 1857 (refer linked artist entry for further details regarding his career).