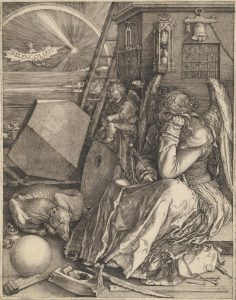 Scholarly studies of the symbolism of this remarkable print emphasize its exploration of the creative process. This impression, of the more common second state, is described by the NGV as more lightly inked than the Barlow impression bought in 1956. The gallery also owns Barlow’s impression of the rare first state (with the number 9 back to front in the “magic square” on the wall).

For the comparison with Klinger, see Zdanowicz Masters of Emotion (2007), unpaginated. For the Spooner cartoon, see https://www.ngv.vic.gov.au/explore/collection/work/60352/