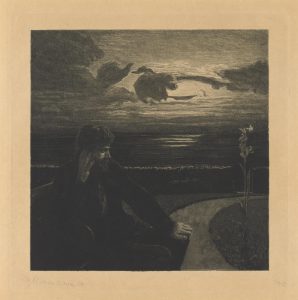 The complete first series of Klinger’s etched variations on the Dance of Death opens with an image of the pervading mood of melancholy arising from thoughts of Death, expressed through the brooding foreground figure (the artist?) and the swirling clouds in the sky above his head. Irena Zdanowicz (2007) suggests Klinger’s indebtedness here to Dürer Melancolia I 1514 {1891} NGV [PR].

Plates 2-9 depict Death’s irresistible impact on diverse types of people, from young to old, high to low, in various situations; finally, in Plate 10, Death is revealed as a paradoxically Christ-like deliverer.

The NGV’s purchase of this series (and two etchings from Vom Tode II), only two years after their publication in 1889, was remarkable. These prints and Whistler Thames set (plates 1-16) {1892} NGV [ET], bought the following year, again on the advice of Herkomer, were arguably the most obviously modern acquisitions for the Melbourne collection to that point (for further remarks along these lines, refer linked artist entry).

The individual prints are as follows:

The NGV’s catalogue provides full details and reproductions of all 10 plates. For the series, see also https://www.privatpraxis-sperling.com/der-tod-in-der-kunst/max-klinger-vom-tode-erster-teil-opus-xi/ (with useful explanatory comments; accessed 15/10/18). For the Dürer comparison, see Zdanowicz Masters of Emotion (2007), (unpaginated), ch.2 and cat.nos.41 (Dürer) and 84 (Klinger)