In 1858, Victoria Adelaide, Queen Victoria’s first child (1840-1901), married Crown Prince Frederick William of Prussia, to whom she was introduced by Victoria and Albert at the Great Exhibition in 1851.

The present lithograph reproduces an oil portrait painted in 1857 (Buckingham Palace). Winterhalter’s companion portrait of her husband is in Schloss Friedrichshof.

For images of Princess Victoria as a child, see also separate entries for her mother’s etchings of the early 1840s, donated to the Melbourne collection by the Queen in 1891, as listed under Victoria [Queen] (1819-1901; German/English). 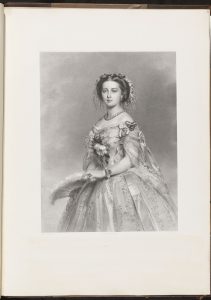 For the impression shown here, see https://www.rct.uk/collection/search#/4/collection/608149/victoria-princess-royal-and-empress-friedrich-of-germany (with size and suggested date as shown above). For the Winterhalter portrait, see https://franzxaverwinterhalter.wordpress.com/franz-xaver-winterhalter-works-1856-1860/ (cat.581: the Buckingham Palace canvas, dated June 1857). For Feckert, see AKL 37 (2003), p.374 and Bénézit 5, p.538