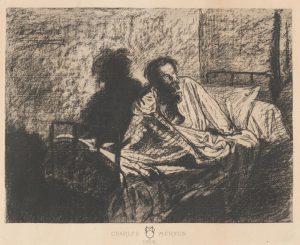 Purchased in 1891 together with Meryon 6 etchings {1891} NGV [ET], this print was listed in the early NGV catalogues as “Meryon mad” (referring to the artist’s unfortunate later circumstances).

In both NGV 1894 and 1905, it is described as a “proof before letters”; in NGV 1905 it is termed a soft ground etching. In other sources, where this portrait is also sometimes described as a heliogravure print, Meryon’s praise for it is said to have initiated Flameng’s long and successful career as a print-maker, illustrator and painter.

A more intense and incisive etched portrait of Meryon during his heyday was produced by Félix Braquemond (1833-1914) in 1853.