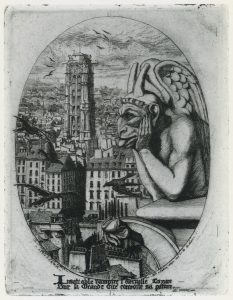 Individual etchings are as follows (including NGV acc.nos.; for details and reproductions, refer the gallery’s online catalogue):

Several of these impressions are described as on green laid paper, although this is less apparent now due to discolouration, apparently due to prolonged exposure to light. All six etchings acquired in 1891 came from the collection of the artist’s friend Gustave de Salicis, together with Flameng Charles Meryon 1858 {1891} NGV [ET].

A pioneer of the French etching revival, Meryon produced moody, heavily-shadowed images of Notre-Dame and other Paris buildings in the late 1840s and early 1850s, earning him high praise from both Baudelaire and Victor Hugo. Later, especially after he was diagnosed with mental illness in 1858, his prints became increasingly fantastical, prefiguring Surrealism.

Le Stryge, a famous image of one of the Notre-Dame gargoyles, was inspired by a passage in Victor Hugo’s Notre-Dame de Paris (1831). The inscription, translated, reads: “The insatiable vampire, eternal lust, forever coveting its food above the great city.”

Meryon’s prints were also widely admired by British and Australian exponents of the renaissance of etching in the later 19th and earlier 20th centuries. Lionel Lindsay, for example, suggested in 1921 that “the whole modern [etching] ‘Revival’…” depended on Meryon.

For further comments on the Meryon prints selected for Melbourne by Herkomer, and comments on their influence on Australian etchers, see Irena Zdanowicz in ABV 1993 (refer bibliography for full details). Lionel Lindsay’s comment (quoted) appears in his article “The Art of Etching,” Art in Australia 1st series, vol.9, 1921 (unpaginated)