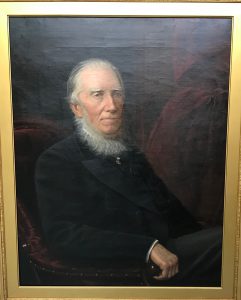 This work, signed and dated at lower right, dates from Flintoff’s later period in Melbourne, where he worked as a portrait painter and photographer from 1872.

Gordon Augustus Thomson (1799-1886), born in Ulster, was one of Melbourne’s earliest inhabitants (in 1836) and also a noted traveler. After years of travelling (especially to Palestine), and time spent living back in Ireland, he relocated to Melbourne permanently in 1872, bringing with him a number of ethnographic objects and curios which he donated to the museum.

The Melbourne Argus, which published a detailed obituary in June 1886, also noted his 1872 and 1884 donations to the museum and NGV.

Not reproduced in the SLV catalogue; ID photo shown here taken by the author (July 2019)

For Thomson, see http://oa.anu.edu.au/obituary/thomson-gordon-augustus-13917 (a reprint of his obituary, published in the Argus, 8 June 1886), also noting an Argus reference to his donating this portrait of himself to the NGV, 23 June 1884. See also http://museumvictoria.com.au/about/mv-blog/sep-2011/royal-charter-gold/, mentioning another Argus report, 23 October 1874, on Thomson’s other donations