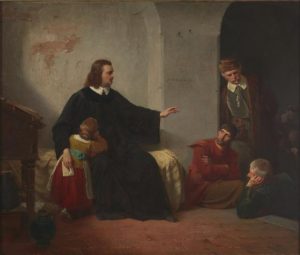 This image, showing Bunyan’s incarceration for supposed sedition (1660-72), was one of the first group of paintings selected for the Melbourne collection. Folingsby painted it in Munich, some years before his arrival in Australia in 1879 and his appointment as NGV Director and Master of the School of Art in 1882: see now linked artist entry for further details.