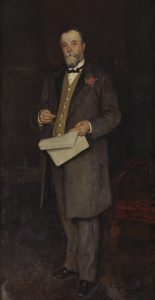 Sargood (1834-1903) arrived in Victoria with his family in 1850, and made his fortune as a merchant. His expansive Elsternwick mansion, Rippon Lea – now administered by the National Trust – was designed by Joseph Reed in 1868.

He entered the Victorian parliament, was member for South Yarra (1882-1901), and minister for defence in the Service government: see Folingsby (G.) James Service 1886 {1886} SLV [PA]. Later, he was a member of the Senate in the new Commonwealth government of 1901. He was also a noted philanthropist, and was appointed Vice-President of the organizing committee for the Centennial Exhibition held in Melbourne in 1888.

Fox’s portrait suggests both Sargood’s genial and cultured character, and his more formal professional life. The painting, still listed in the 1943 NGV catalogue, was evidently transferred to the SLV later.