This work was first listed in the 1861 MPL catalogue (under donations to the new Museum of Art), then in the 1865 NGV catalogue, describing it as an Art Union prize, “in Parian marble,” and then in AR 1870-71 as by Gibson. It was presumably a replica of a statuette, or a relief such as the marble version in the V&A, dated to c.1839 (reproduced below). For the “Parian” medium, see * Bonham Carter Florence Nightingale {1880} Loc? [SC]. 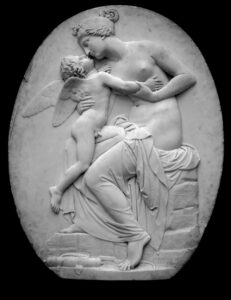 Gibson studied in Rome with both Canova and Thovaldsen, and later became famous in England for his own Neoclassical works, notably his Tinted Venus (c.1851-56), reproduced in Melbourne’s cast collection.

For the marble relief shown here, and comments on other variants, see V&A catalogue (no.A.22-1963). For Gibson, see e.g.https://en.wikipedia.org/wiki/John_Gibson_(sculptor),  a detailed and well-referenced article