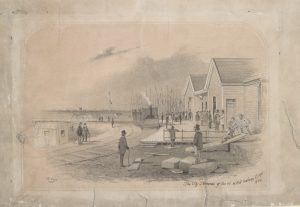 This impression is almost certainly identical with one recorded as donated to the Melbourne collection in 1868 (probably by Fawkner).

It presumably comes from Sketches in Victoria, a series of 29 lithographs by Gill published by Blundell & Co., Melbourne, 1855-56 (this print is numbered 14 at top left). Another, better impression was accessioned in 1934.

In September 1854, during the early years of the Victorian goldrush, the Melbourne & Hobson’s Bay Railway Company opened Australia’s first train line, carrying passengers and freight over the 4 kilometres between Sandridge (Port Melbourne) and Flinders Street: see Carroll in Brown-May & Swain (2005).

For the railway information noted, see the entry by Brian Carroll in Brown-May & Swain Encyclopedia of Melbourne (2005), p.588