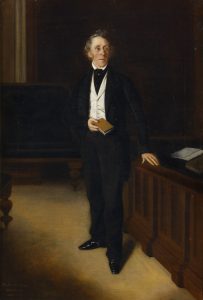 A rival with John Batman for the title of founder of Melbourne, Fawkner was an influential newspaper proprietor and member of parliament. He arrived in Tasmania with his family in 1803, and then in 1835 settled in Melbourne, where he developed a successful career as a hotel operator and newspaper publisher. He was a member of the first Victorian Legislative Council of Victoria (1851), and became well known as a critic of the squattocracy.

Fawkner’s patronage of the arts appears to have focussed mainly on William Strutt, as Elisabeth Findlay has emphasised recently (2014), discussing a series of portraits and other schemes dating from the 1850s.

He was also evidently a collector during the 1850s-60s. His substantial 1868 donation of works on paper, one of the largest  gifts to the Melbourne collection in the pre-Felton era, included a significant group of early views of the city, many of them still preserved in the SLV, as listed above.