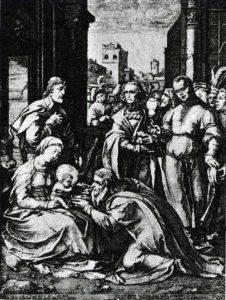 But they are not listed among the gallery’s 1879 acquisitions, and do not seem to have formed part of the Levey gift.

This plate, supposedly in the manner of Lucas van Leyden (1494-1533), is from the series of six plates of episodes from the life of the Virgin Mary, made by Goltzius in 1593-4, in imitation of other artists’ style.

The 1905 NGV catalogue, which includes a reproduction of the present impression (as shown here), notes that a monogram in the lower left-hand corner identified it as previously owned by a collector named Samuel Leith. Unfortunately, neither the present print nor the Visitation (imitating Parmigianino) appear to be extant in the Melbourne collection.

For another impression, in the Metropolitan Museum, see http://www.metmuseum.org/collection/the-collection-online/search/347357. For further information and references on Goltzius and the Marian series, see linked artist entry