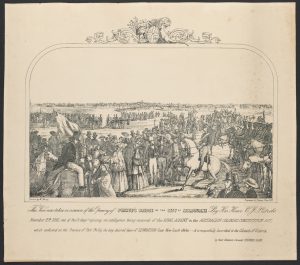 The opening of Prince’s Bridge on 15 November 1850 became the focus of celebration of Victoria’s separation from New South Wales, passed into law shortly beforehand, although not formalized until July 1851, just before the discovery of gold in Victoria.

Thomas Ham, active as a printmaker and photographer in Melbourne after he arrived from England in 1842 (see linked artist entry for further details), published comparative images of the new bridge and its rickety predecessors in September 1850. On the day the new structure opened, according to the Melbourne Argus, Ham adopted an entrepreneurial approach, setting up a mobile lithographic press and running off impressions for the crowd.

The impression reproduced here is one of several in the SLV; see also Ham (T.) after Strutt Opening of Prince’s Bridge 1851 (c.2) {1868} SLV [PR], probably donated by John Pascoe Fawkner.

For the impression reproduced here, see SLV online catalogue (also listing other impressions). For the information about Ham’s mass production of lithographs on the day of the opening, see Downer & Phipps Victorian Vision (1985), pp.16-17, citing relevant sources from 1850