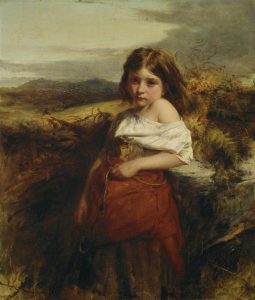 This typically Victorian painting, shown at the Royal Academy in London in 1864, was one of the first works chosen for Melbourne by Eastlake.

Ann Galbally (1992) quotes the diverse views of Melbourne critics in 1864-5: one writer saw the girl as unrealistically attractive, while another described her as more touching in her simplicity than Bedford La Belle Yseult 1863 {1864} NGV [PA], beside which this canvas hung in 1894.

The present work also seems closely comparable with photographs of the era, notably the well-known images of young girls taken by Charles Dodgson, aka Lewis Carroll (1832-98).

Herdman, who showed regularly at the Royal Scottish Academy from 1850, was known particularly for patriotic Scottish history paintings, e.g. Prince Charles seeking refuge at the house of an adherent (1876), formerly in the Adelaide collection of Robert and Joanna Barr Smith.