Another work bought from the 1892 Anglo-Australian Exhibition in Melbourne, this example was still listed in the NGV collection in 1914 and 1915, when it was recorded in the gallery’s annual reports as on loan to the Maryborough and Mildura shire councils respectively.

The artist, whose surname is sometimes also spelt Herne (as in both NGV 1894 and 1905), was born in Sydney, and worked in Australia until the early 1880s, when he relocated to London, becoming so successful that he was employed to teach watercolour technique to the daughters of the Prince of Wales, later Edward VII.

Three of his watercolours, including the example reproduced here, were bought for the Sydney gallery in the 1880s. 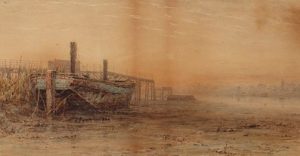