Bought for the NGV on Summers’ advice, this work no longer appears to be in the NGV, although it was still in the collection in 1943.

Summers, as quoted in a letter from Alfred Thomson to Redmond Barry (published in The Argus in October 1869), mentions several available paintings of Italian peasants by the artist, simply calling him Innocenti, and describing him as “one of the most rising artists here [Rome].”

The early NGV catalogues give his first name as Giovanni, but he is almost certainly identifiable as Guglielmo Innocenti, a Roman painter known for various extant depictions of peasants, such as the example reproduced below, auctioned in 2015.

A number of works presumably by Guglielmo appear in various references as the work of a later artist, Camillo Giovanni Innocenti (1871-1961), to whom Bénézit ascribes the work formerly in Melbourne – clearly incorrectly, given the dates. 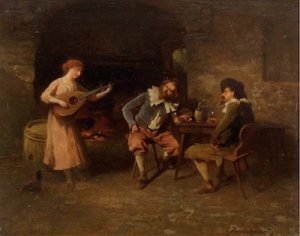 [photo: Guglielmo Innocenti, An inn, with two men and a woman playing the guitar (auctioned , 2015)]


For Summer’s advice, see especially Thomson, “The Public Gallery of Art” (1869), available online; I’m grateful to Jennie Maggs, researcher into the work of Charles Summers and his son, for this information

Camillo Innocenti, described as the son of an architect, was a genre painter who directed the Cairo Academy of Fine Art after World War I: see Bénézit 7, pp.567-68 (erroneously listing the present work: see comments above) and AKL 76 (2013), pp.320-22. See also  http://www.askart.com/artist/Camillo_Giovanni_Innocenti/11041906/Camillo_Giovanni_Innocenti.aspx; for what appears to be an example of his own work, Al Divino Amore, c.1897, see e.g. http://www.minervaauctions.com/en/aste/old-master-paintings-19th-century-art/6829-camillo-innocenti-roma-1871-1961-al-divino-amore-1897-circa/