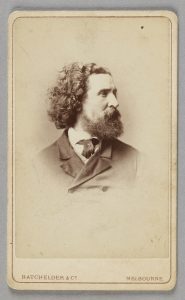 A very significant figure in the early history of the Melbourne Public Library and its art collections, Summers worked in Victoria between 1854 and 1865, before relocating to Rome for the last part of his life.

In 1859, he was tasked with repairing a number of the initial group of plaster casts purchased in 1859, after damage suffered in transit from Europe. He was also a member of the Commission of Fine Arts established in 1863 to advise on acquiring the first paintings for Melbourne.

During the 1860s-70s, a considerable number of his marble busts of Redmond Barry and various other worthies of the era were added to the collection, together with the four marble statues of members of the royal family donated in 1878 (see Summers (Charles) Queen Victoria {1878} Melb.Showgrounds [SC]), and several statues based on Biblical and allegorical subjects.

His major work in Australia was the monumental bronze statue of Burke and Wills (1864-5; originally located at the intersection of Collins and Russell Streets, Melbourne), a work which drew on a range of antique and Renaissance references to commemorate the explorers and their tragic fate. As Ron Radford observes acerbically (1976), proof of Summers’ success in blending reality and idealism is the fact that “the monument almost convinces us that Burke was a hero instead of a stupid vain fool.”

Shortly after completing the Burke and Wills statue, Summers returned to Europe, and ran a successful studio in Rome for the remainder of his life, while continuing to attract various commissions from Melbourne: see e.g. Summers (Charles) Sir Charles Sladen 1870 {after 1894?} SLV [SC], inscribed on the pedestal: C SUMMERS Sc. / ROME / 1870.

While in Rome, he is also recorded as having advised on the purchase of two paintings for the Melbourne collection: see Carta Adam and Eve finding Abel 1869 {1870} [NGV [PA] and * Innocenti Italian Peasants {1870} Loc? [PA].

The full significance of his contribution to the Melbourne collection in its early decades, especially in terms of his own sculptural work, was obscured later, as a result of wholesale de-acquisitions, mostly in the later 1930s and early 1940s. As a result, none of the 20 or so sculptures by Summers acquired before 1905 is now in the NGV collection, although several are preserved in the SLV. Others, though, were simply auctioned off, for what were noted at the time to be remarkably low prices: for further details, see 1943 auction of NGV sculpture.

The faint praise given to him in his Argus obituary – “competent in a dull and uninspiring period” (a remark quoted elsewhere, for instance in the Australian Dictionary of Biography) – may go some way to explaining subsequent neglect of his works, and in particular Daryl Lindsay’s early 1940s decision to transfer or de-accession all the sculptures by him then held in the NGV.

Admittedly, the succession of Summers’ busts of middle-aged white male statesmen in the pre-Felton collection (a number of them subsequently transferred from the NGV to the SLV) can become wearing to a modern eye. However, these works are of a piece with his era, and, at his best, for instance in the busts of Redmond Barry and Charles Perry listed above, Summers achieved an ennobling portrait style perfectly suited to the burgeoning ambitions of the new Victorian colony.

See also Charles Francis Summers (1857-1945), who trained initially with his father, and later pursued his own long and successful career.

For the Burke and Wills statue, see in particular Gerard Hayes, “Melbourne’s first monument: Charles Summers’ ‘Burke and Wills’,” LaTrobe Journal no.42 (Spring 1988), pp.42-52; see also The 100 Streets Project: Melbourne: “In search of Burke & Wills. Why have those explorers gone missing again?” (https://www.melbournein100streets.com/statues/; published 19 Dec.2017), concerning the current temporary removal of the statue from the corner of Collins and Swanston Streets, during work on the Melbourne underground rail loop. For a good photo of the statue in its usual recent location, by Johntorcasio, 2013, see https://commons.wikimedia.org/wiki/File:Burke_and_Wills_Monument.jpg (websites accessed 9 May 2020)