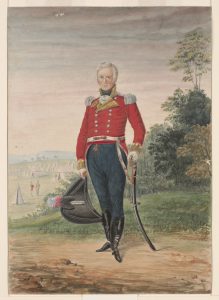 This was one of three watercolours commissioned from Jackson in 1873-4, apparently to serve as models for works in the Melbourne Public Library’s “Oval portrait” series. A somewhat amateurish replica of an 1810 watercolour of Johnston by Robert Dighton (Mitchell Library, Sydney), this work was used as the basis for no.12 in the MPL’s oval series, by Thomas Chuck.

George Johnston (1764-1823), a career soldier, arrived in Australia with the First Fleet in 1788. Acting on behalf of John Macarthur and other disaffected parties, he arrested Governor William Bligh, and assumed the position of Lt-Governor of NSW from January to December 1809, actions for which he was subsequently court-martialled in London (June 1811), and cashiered. Later, he returned to New South Wales, and became a successful farmer.