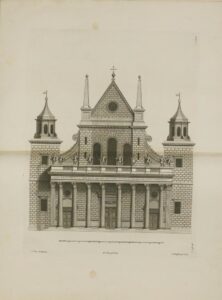 These volumes, funded substantially by Lord Burlington (1694-1753), and edited and published by William Kent (1685-1748), consist mainly of engravings after architectural designs by Jones, notably the Whitehall Palace (covered in detail in vol.1). Many of the buildings, such as his classicizing facade for the old St Paul’s Cathedral in London, reproduced here, are now lost.

As Kent notes in his introduction, the plates are based mainly on drawings by Jones and his assistant John Webb, then in the collection of Burlington. Also included in the book are “some additional designs” by others, including Palladio’s church of S.Giorgio, Venice, and Burlington’s own designs for Chiswick House. The engravings are by various printmakers including Paul Fourdrinier (1698-1758), and Hendrick Hulsbergh (active in London from c.1709; d.1729).

[photo: Facade for St Paul’s Cathedral (vol.2) {from another copy}]

See SLV catalogue for further details (2 vols.bound in 1). For Jones, who also designed costumes and scenery for court masques staged by James I and Charles I, see e.g. Vaughan Hart, Inigo Jones: the architect of kings, Yale UP, 2011