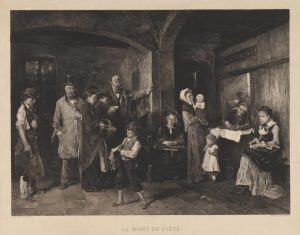 Munkácsy, born in an area of the former Hungarian empire now in the Ukraine, achieved a substantial reputation for his genre and religious paintings, in Paris and elsewhere in later 19th-century Europe.

This print reproduces Munkácsy’s 1874 painting The Pawnbroker’s Shop; the title alludes to the type of institutional pawnbroker (in Italian, monte di pietà) first developed as a charitable institution during the Renaissance period to combat exorbitant money lending to the poor.

Koepping, identified in the inscription at lower right, also produced other etchings after Munkácsy. Bénézit observes that Koepping was also a noted Jugendstil glass-maker.