The artist, a member of a family of Dutch landscapists, apparently specialized in marine views. His works regularly appear on the European auction market, generally selling for modest prices. 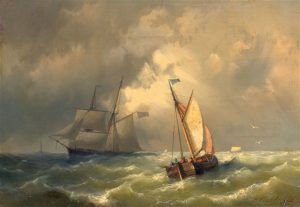 Koekkeok also ran an art gallery and dealership in London during the 1880s and 90s, with a branch in Melbourne. Pre-Felton works acquired for the NGV through this source included: