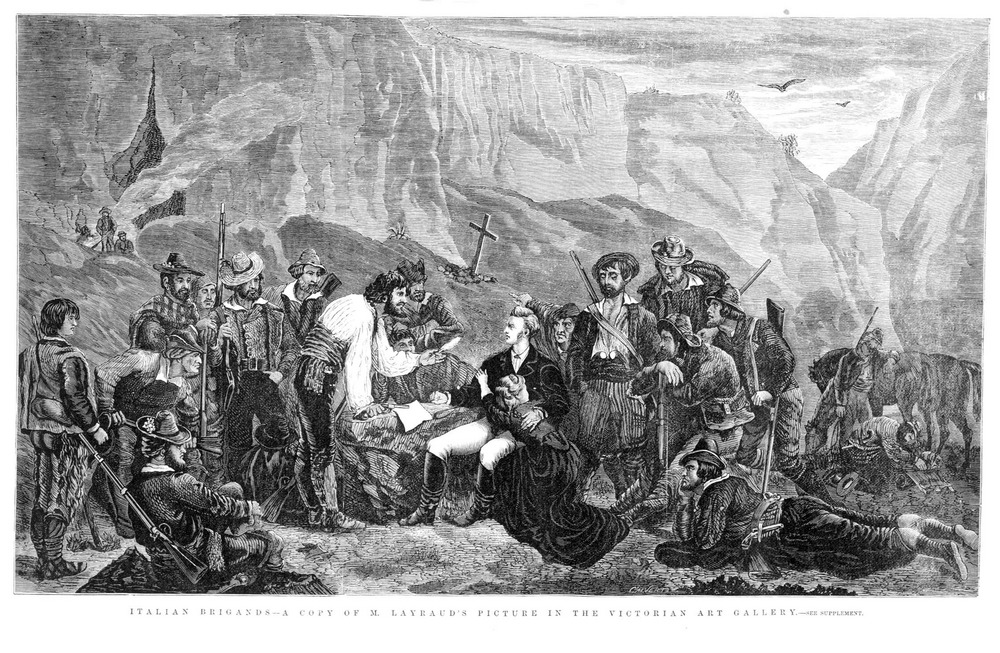 Despite humble origins, Layraud won the Prix de Rome in 1864 and then studied at the French Academy in Rome.

This expansive depiction of Calabrian bandits holding a pair of English tourists to ransom was shown in the French section of the 1871 exhibition in London, and then at the 1873 Paris Salon, where it was bought for Melbourne for £400.

In the Illustrated London News of 16 Sept.1871, quoted at length in NGV 1894, it was suggested that the narrative was based on actual events. However, it was emphasized that the supposed similarity of the young man to the Marquis of Lorne (who married Queen Victoria’s fourth daughter Princess Louise in March 1871) was “purely accidental.”

In the NGV’s McArthur Gallery, opened in 1875, the painting was hung prominently, opposite Herbert Moses bringing down the Tablets of the Law 1877 {1878} NGV [PA], an equally large canvas. The identities of the central couple continued to excite comment after the work’s exhibition in Melbourne. According to Edmond Marin la Meslée, a French-born immigrant who saw it in 1877, it showed the Marquis of Lorne with another woman, known to him before his marriage to Princess Louise, causing a scandal when it was shown in London. Perhaps reflecting these continuing rumours, an Argus critic expressed his view in 1882 that the unedifying subject-matter hardly justified the scale of Layraud’s painting.

By 1940, both this work and Herbert’s canvas were listed among the 15 or so 19th-century pictures consigned to the Newspapers Room of the Public Library; and although Layraud’s picture was still listed as in the NGV’s collection in 1943, it seems to have disappeared since.