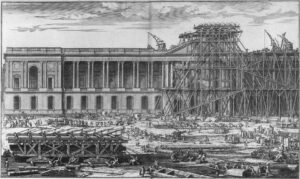 This famous engraving, frequently discussed and reproduced in accounts of the construction history of the Louvre, vividly evokes the complex process of transporting and installing the large stone raised, in two halves, to form the pediment of the East façade.

Maxime Préaud, in his catalogue entry on this print in the 2015 Getty exhibition A Kingdom of Images, notes that different phases of the lengthy operation involved are combined here, together with a rich array of subsidiary figures and details.

Claude Perrault, in his Vitruvius edition (1684), intimated that he had invented the machinery needed for this formidable task. However, Préaud suggests that the architect was probably dependent on similar apparatus developed by Domenico Fontana to transport the Vatican obelisk in 1589 (and engraved at that time).

The NGV catalogue does not include a reproduction. The photo shown above is from Berger Palace of the Sun (1993), fig.86 (available via Wikimedia Commons)