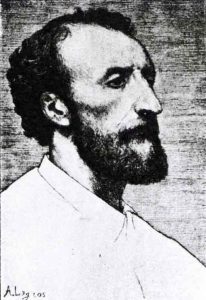 Charles Baudelaire, hailing the French revival of etching in 1862, singled out Manet and Legros, praising the latter’s prints for what he called their primitive, archaic air.

Legros lived and worked in England from 1863, teaching etching at the South Kensington School of Art and the Slade School, where he was appointed Professor in 1876. He was influential on the British etching revival, teaching Strang, Holroyd and others; he also knew Whistler and Haden.

Unfortunately this print no longer seems to be in the collection. However, a number of Legros’s etchings, and a painting, were acquired for the NGV after 1905 (for details, see the gallery’s current online catalogue). Another impression of the present print was donated to the Art Gallery of New South Wales in 2013.

Dalou (1838-1902) was a French sculptor whom Legros met in his early years in France, and then portrayed while Dalou was in exile in England for 8 years following the Paris Commune of 1871. Dalou’s earthenware figure of Sibell Mary, Countess Grosvenor (1874), produced during that period, was acquired for the NGV through the Felton Bequest in 1955.