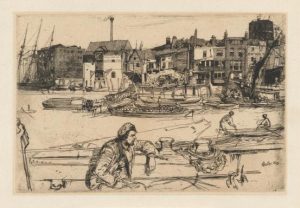 These etchings, dating mostly from the late 1850s-early 60s, were first published as a set in 1871. Milbank (Plate 14), inscribed “The Works of James McNeill Whistler – Etchings and Drypoints, are / on View at E.Thomas’ Publisher  / 39 Old Bond Street / London,” was used to advertise the first exhibition of prints from the series in 1861.

Joseph Pennell wrote in 1908: “there is no doubt that the Thames plates, notably the Black Lion Wharf, have, for artistic rendering of inartistic subjects, and for perfect biting, never been approached by anybody…” And according to print expert Campbell Dodgson (1922): “The Thames etchings have been praised so often and so well that it is difficult to find anything new to say about them. One can but endorse and reaffirm what others have said about the keen eye for the picturesque, the masterly and careful drawing, the nice adjustment of the line to every variety of building material in the ramshackle old riverside houses, which made such plates as Thames Police, Black Lion Wharf, or Eagle Wharf … unsurpassed and unapproachable in their particular genre.”

Numerous commentators have added their plaudits and insights over the years. Anne Hollander, for example, in her 1989 book Moving Pictures, notes that prints like Whistler’s Rotherhithe (Thames set, plate 5) exemplify the cinematic tendencies of pre-cinematic art.

Melbourne’s set, acquired from the Fine Arts Society in London for the modest sum of 16 guineas, had a strong impact on the Australian etching revival of the late 19th and early 20th centuries, as Irena Zdanowicz (1993) demonstrates in some detail, especially in regard to the prints of Lionel Lindsay.

For the impressions purchased in 1892, and their subsequent impact on local etchers, see Zdanowicz “Herkomer” (1993)

For complete catalogues, see Edward Kennedy, The Etched Work of Whistler, 3 vols., New York, 1910; and the authoritative modern online catalogue available through Glasgow University, by Margaret MacDonald & others (2010): see http://etchings.arts.gla.ac.uk/catalogue/. The comment from Elizabeth Robins Pennell and Joseph Pennell, The Life of James McNeill Whistler, London and Philadelphia, 1908, vol.I, pp. 91-92, is quoted in the Glasgow University catalogue entry on Plate 1 (G54). The passage from Campbell Dodgson is quoted in the Glasgow entry on Plate 10 (G50). See also Hollander’s Moving Pictures, Harvard UP, 1989, ch.12