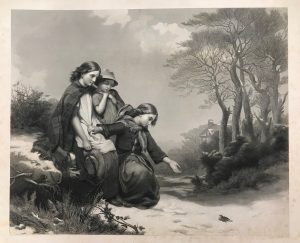 This typically Victorian image shows three girls discovering a sick bird in the snow. The engraved inscriptions identify the title, the artists involved, and the fact that the print was published by the Art Union of London in 1867.

A note with the NGV impression identifies the source as Le Jeune’s painting The Wounded Robin, first shown at the Royal Academy in 1864 and sold at Sotheby’s on 15 March 1983.

The NGV catalogue lists this as by an unknown engraver after Le Jeune (not reproduced). Author’s ID photo shown here (2019)


For a reproduction of Lejeune’s painting (dated 1862), see https://www.abreugallery.com/art/figurative/the-wounded-robin-1862/; and for Le Jeune (not listed in either Bénézit or AKL), see e.g. https://en.wikipedia.org/wiki/Henry_Lejeune [both sites accessed 17 August 2019]

For Lemon, see e.g. Bénézit 8, p.813 (listing him as a reproductive engraver, active in London)