This work reproduces a work made for Agnew & Sons, specifically for this print, showing the prelude to the siege of Sebastapol, on the Black Sea (1854-55).

The Crimean War between Russia and a British-French-Ottoman Turkish alliance (1853-56), the only major British war of the Victorian era, had a significant impact on the collective psyche of the period. The Charge of the Light Brigade, at the Battle of Balaclava in October 1854, was made famous by Tennyson’s poem, written shortly after the event, and depicted in various images including a painting by Barker (1877). 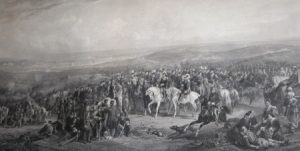 For another impression, see http://www.nationaltrustcollections.org.uk/object/1396314 (Felbrigg Hall, Norfolk; reproduced above); and for another copy of the key, identifying all the major participants, see https://www.rct.uk/collection/2956256