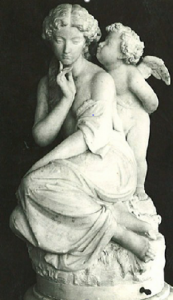 This statue is listed in NGV 1894 and 1905 as “Young Woman with Cupid,” and ascribed to G.Lombardi – identifiable as G.B. Lombardi, rather than his younger brother, who specialized in animal sculptures: see Lombardi (Giovita). The SLV holds a stereoscopic photo by Boake (c.1905?), labelled “Cupid and Psyche,” and the work also appears to be visible second from left in the photo of the Public Library’s Vestibule published in the 1905 NGV catalogue: see now 1905 Vestibule.

It is a pleasure to report that this group (unlike many other pre-Felton sculptures later deemed surplus to requirements) survived its de-acquisition from the Melbourne collection, and is still in Warrnambool, where it was transferred in 1943. It is known there as First Whisper of Love, the title inscribed on its marble pedestal.

Another obviously related statue by G.B. Lombardi, known as Cupid and Psyche, or Love awakening, sold at Christie’s in London in 2011, for a substantial sum. The Christie’s catalogue entry notes that this second group was previously in a New York collection, and before that in South America, probably accounting for its inscribed title, La Revelacion de Amor. Christie’s add that this “is Lombardi’s second, more elaborate version of the universally pleasing subject-matter of Cupid and Psyche, the first version being somewhat smaller, lacking the intricately-carved flora found here, and showing Cupid to Psyche’s left side” (possibly referring to the work now in Warrnambool).

For the stereo photo by Boake (called “Cupid and Psyche”), see SLV catalogue (with a good reproduction); and for the general view of the Library’s Vestibule, see NGV 1905, p.104