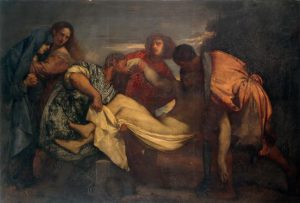 Titian’s Louvre painting, admired by many in the 19th century, including both Turner and Ruskin, was copied by Longstaff in partial fulfillment of his obligations as the recipient of the inaugural Travelling Scholarship in 1887.

Although this copy received high praise in both Paris and Melbourne at the time, technical deficiencies have become apparent since, and the work is now in poor condition, displaying widespread cracking of the paint surface.

See also linked artist entry and separate entries for further works produced by Longstaff under the terms of his NGV scholarship.

Titian’s painting (Paris, Louvre, Inv.749; 148 x 212 cm), is dated to c.1520 (Louvre) or c.1526-32 (Wethey). Turner made fulsome notes, and a sketch of it, in an 1802 notebook held in the Tate Gallery (Turner Bequest LXXII 31a and 32): see http://www.tate.org.uk/art/artworks/turner-commentary-on-titians-entombment-of-the-dead-christ-inscription-by-turner-d04314; http://www.tate.org.uk/art/artworks/turner-the-entombment-of-the-dead-christ-after-titian-d04315. Ruskin also praised it, and owned a watercolour copy of it: see http://www.ruskinatwalkley.org/object.php?hotspots=on&room=2&object=20