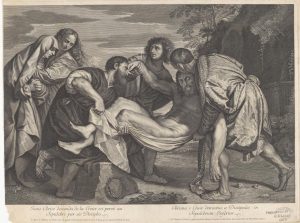 This large-scale engraving was folded in half in bound albums of the Cabinet du Roi series. It is listed in both NGV 1894 and 1905, identified in each case as by Rousselet after Titian.

Listed in the NGV catalogue as by an unknown engraver after Titian (with reproduction as shown here). Cf. Suite et Arrangement (1727), p.1; Duplessis Cabinet du roi (1869), p.6, no.2; and for another impression, see http://www.artoftheprint.com/artistpages/rousselet_gilles_theentombmentof christ.htm (reproduced)